To claim that there is a libertarian, liberal, or free-marketeer answer to a scientific question would be ludicrous. Why, then, are the staff at free-market think-tanks more likely than most to fall for the lies circulated by the sociopathic global-warming denialists? If it's because the liars know how to flatter the libertarian's prejudices, that's truly shameful.

Byron Schlomach of Arizona's own Goldwater Institute revealed in a recent newsletter article that he's an easy mark for such con men. So easy, in fact, that he fell for the global warming denialists' equivalent of the Canal Street, New Orleans "betcha I can tell you where you got your shoes": the Oregon Petition.

The connection between Schlomach's article and said hoax was glaringly obvious. Schoolboys know that human life per se is carbon-neutral; the CO2 we exhale was recently taken out of the atmosphere by plants. (The beef industry is not carbon neutral because the net effect on atmospheric composition is to replace a considerable amount of CO2 with CH4, or methane, a far more potent greenhouse gas.) Schlomach, on the other hand, is either genuinely afraid that Arizona will regulate his "very breath", or thinks his readers as so many fools who can be made afraid. Of the denialist hoaxes, the Oregon Petition emphasized most strongly that CO2 is exhaled as a normal part of human respiration.

The bare minimum we ought to be able to expect from think-tank staff anywhere on the political spectrum is that they be neither suckers nor swindlers, that they never willfully lie or dispense with critical thought. Robinson and Soon dressed up their old Oregon Petition propaganda to look like something out of the pages of PNAS and published it in the Journal of American Physicians and Surgeons, which despite the name, is a right-wing newsletter, not a peer-reviewed technical journal.

If Schlomach had bothered to do any digging, he'd have found that this "paper"'s nearly identical predecessor was so widely and solidly debunked as to have no credibility, and that this one, too, has some obvious faults, the most prominent being its dishonest and deliberately misleading selection of data. If one wants to discuss global temperature, one must actually reference global temperature, not studies of the Sargasso Sea! Moreover, even schoolboys know that the anthropogenic global warming thesis does not imply that temperature will correlate 1:1 with hydrocarbon use (as in Fig. 3), nor that year-to-year fluctuations will not correlate to solar activity! Matters are much more complicated, that's why the models involved are of the sort that require computer evaluation and consequently give economists fits for reasons nobody but economists understand. (Were they traumatized by Fortran 77?)

The least we can expect from a think-tank is that it will have enough internal editorial checks so as to not allow someone so willfully lazy as to not check if a source from a dubious "journal" has been discredited to send his arguments to one of the larger contact lists in the state. The mistake was made: to preserve its reputation for honesty and high intellectual standards, the Goldwater Institute must kick Schlomach to the curb.
Posted by B. Kalafut at 1:23 PM No comments:

Is there anyone who can tell me how much Wal-Mart "loses" every year because Target is allowed to be its competitor?

According to the Arizona Daily Star, one George Borjas of Harvard University has not only determined the obvious: that the presence of illegal aliens lowers the employment rate and the wages of Arizonans, but even quantified the loss: $1.4 billion per anuum.

What neither he nor the Star have mentioned is that there is no net loss to the community. Considering that the lower wage is a savings to the entrepreneur and consumer, the net effect is at least $0. Take into account the dead-weight loss that 100% effective enforcement would bring by diverting more productive workers to the current less productive (and thus low-wage) occupations, and we have illegal immigration bringing a net benefit to the economy.

Go one step further, throwing in to the account the opportunity the presence of the illegals affords to the businessman, and the net benefit increases further. Now imagine what the benefit would be were illegal immigrants legalized!
Posted by B. Kalafut at 1:24 AM 2 comments:

The illicit sale of homemade tamales (and less frequently, fresh corn tortillas) is already so common in the State of Arizona and treated so benignly by the powers that be as to be de facto legal. Can't we just go ahead and legalize it already?

And while we're at it, let's have an amnesty for current tamaleras.

I discuss cottage industries and food-business licensing today on the Pima County Libertarian Party 'blog.
Posted by B. Kalafut at 11:20 PM No comments:

Guild, church, and king, rolled into one. 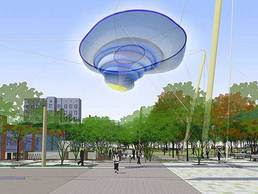 In my experience--and I'm no expert on the artistic community--being an artist and an analytic thinker are negatively correlated. I've met a few exceptions, certainly, and there's little doubt that Leonardo Da Vinci had or Helaman Ferguson has understanding of mathematics, but in general logic and reason take a back-seat to touchy-feely rhetoric.

Leave it, then, to an artist to turn a debate over whether or not a city should spend millions of dollars on a piece of public art into a question of the artistic merit of the intended work, in this case a large kite designed by Janet Echelman. To quote sculptor Joan Baron, as told to the Arizona Republic:

"The city should do everything in its power to make sure this piece is installed," Baron said. "The work is significant and would be a major contribution to the public-art collection of Phoenix. People shouldn't be afraid of it, but welcome it."

The work is significant, QED. To a person with vulgar expectations of government, that is really the end of the question. Transferred to the modern state are the expectations the medieval man had of guild, church, and king, hence it is patron of the arts. Good art deserves patronage the same way good boys deserve their allowance.

Perhaps it doesn't occur to Baron that Phoenicians would prefer that the city do "everything in its power" to patch potholes, fight crime in poor neighborhoods, or make it easier to prosper by lowering sales and property taxes, or, superlatives being the mark of sloppy minds, at least prefer that such things take priority over fancy kites meant to evoke a cactus blossom. And the public's discontent on learning that city ordinance requires the money to be spent on art seems to strike her as the mark of savagery, of people "afraid" of a mass of wire and mesh resembling a moon jelly.

Cities own parks, and parks hold artwork. For sane advocates of limited government, this is far from ideal, but so benign that it's probably of lower concern than the public library. Perhaps it's a side-effect of economic liberalism itself. But we can at the very least expect that such parks be managed responsibly. There's certainly a declining return between six thousand dollar sculptures like the one Baron is doing for Tempe and multimillion dollar projects like Echelman's. Moreover, it's about time to insist that those who say It Would Be Nice ought to put their money where their mouth is. Public art is more properly the domain of the benevolent association and the Chamber of Commerce than something so important as to be funded by compulsory taxation. Echelman ought be reminded that no city at all built the Eiffel Tower (or the Vietnam Veterans' Memorial, for that matter) and that most public art in the USA, including quite a few major works, either belongs to private institutions or was funded with private money.

Moreover, the public's concerns shouldn't be dismissed as fear of art. As Virginia Postrel explained in The Substance of Style, the negative aesthetic externality is very real and the looks of objects in plain view can involve a balancing of legitimate interests. If the neighbors or the park's current users think the cactus blossom or jellyfish is unsightly, that should be taken into account.

Phoenecians would do well to throw the city officials who let the passionate flim-flam of artists outweigh the tastes of those footing the billout of office, and to use the initiative process to dump the ordinance establishing a lock-box for art funds while they're at it. The matter will likely be forgotten in a few months; I predict no change.
Posted by B. Kalafut at 10:50 PM No comments: