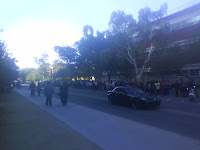 At 3:50 PM the queue to see President Obama's 6 PM address (honoring those wounded or killed in Saturday's spree shooting) in the McCale Center at the University of Arizona extended past the Physics and Gould-Simpson buildings, nearly half a mile away.

The McCale Center is said to hold 14,000; overflow will be directed to Arizona Stadium where the speech will be played on the giant scoreboard televisions. (Do they still call them JumboTrons?) UA News says that all attendees will go through "airport-like" security. If that includes taking off shoes or copping a feel, they won't even fill McCale between 4 PM and the start of the address.

As for me, I'll either watch the address on Arizona Public Media's live feed or read a transcript afterwards. Many reports claim that President Obama will avoid politics tonight and some claim that he will speak about tolerance. Given the extent to which David Fitzsimmons, the Huffington Post, Clarence Dupnik, and numerous others have poisoned the discourse it will be difficult to talk about tolerance tonight without being political and without appearing that he is joining in or approves of the slanderous fantasies we heard too much of on Saturday and Sunday. The question would almost ask itself: If rhetoric or "vitriol" or whatever you want to call it did not motivate the spree shooting, then why are you bringing it up?

David Harsanyi notes the chilling implications of a dialogue about 'civility', especially one in which it is claimed that "anti-government" classical-liberal rhetoric is dangerous. That should hit home with many of the readers of this 'blog.

And on an only tangentially-related note, if you're at the speech and looking for a bite to eat either before or after the event, most of the places I recommended for lunch should be open. Mr. Antojo's makes some of the best carne asade tacos in town, as long as you have them hold the guacamole. Among places not on that list, try Wilko or Vila Thai (all near Park and University) for slightly upscale dining, Zachary's (6th and Fremont) for reliable if not great deep-dish pizzas, Rosati's (6th and Campbell) for a Chicago-style square-cut thin crust pizza as good as any from Chicago, and 1702 (1702 E. Speedway, about a block and a half west of Campbell and Speedway) for high-quality out-sized thin slices and one of the best beer selections west of the Mississippi.
Posted by B. Kalafut at 4:02 PM