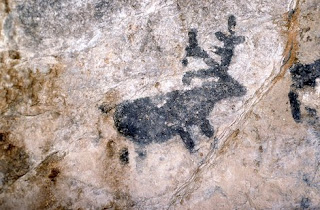 There aren't many places in the U.S.A. where anyone can simply walk up to a sensitive archaeological site, but no matter where you live in Arizona, chances are high that one is nearby. (There also aren't many places where the Border Patrol simply runs over sensitive archaeological sites as they've done to Santa Ana del Chiquiburitac; accessibility has its drawbacks.)

Black Sheep Cave, a little "hole" in the Tucson Mountains, may not tell us much about the quotidian life of the contact-era Native Americans--probably O'Odham--who drew on its walls, but it is certainly visually impressive. And it's a short walk from a few well-known trails. No, I won't post directions on the Internet, but I will show you photos.
Posted by B. Kalafut at 9:35 PM